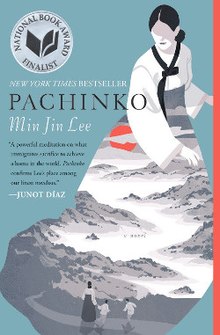 Pachinko: A Journey Across Generations

“History has failed us, but no matter.” So begins Pachinko, author Min Jin Lee’s story of Korean immigrants who left for Japan during the Japanese occupation. Shifting perspective across four generations of a Korean family as they battle through depths of poverty, war, death, and racism, the book forced me to rethink the version of history I’d received growing up as a Korean-American.

Out of the novel’s rich menagerie of characters, one character particularly spoke to me: Noa, the first-born son of Sunja, is the most studious in his family, learning to speak Japanese better than a native and eventually enrolling in his dream college at Waesada. As the only son of an immigrant family, I too put a lot of pressure on myself to study hard and lodge myself into the mold of what I considered a successful American life — the fantasy narrative often pushed by mainstream culture.

By the end of the novel, Noa surrenders to the weight of living a life of lies and commits suicide. Meanwhile, his high school dropout younger brother has become a tycoon, taking the helm of the Pachinko business and sending his son off to the States for schooling.

Pachinko is a remarkable novel in that it disabuses us of easy social narratives and stereotypes. Immigrant mother Sunja is expected to bear children and do housework; however, she becomes the breadwinner and a pillar of resistance that her family looks up to. Though women are powerful, this truth is too often suppressed in narratives of patriarchy. Conformity is widely regarded as intelligence, but Noa’s tragic death suggests otherwise.

We have all given in to societal narratives, despite what our hearts tell us. From an act as simple as sacrificing an authentic passion for extra study time to one as egregious as masking one’s identity to avoid negative judgment, surrendering to a stock narrative comes in many shapes and sizes.

I hope by sharing this novel, we youth can rethink and rewrite the dominant narratives society feeds us, thereby unraveling the foundations that necessitate such power to the unjust pillars that dictate our lives.

Pachinko gave me the hope of writing my own story, and I hope that through its pages, future teen readers will be reminded that they can do the same.

Eric Song is a teen writer and a current high school senior at Riverside’s Martin Luther King High School. Song possesses a vast arsenal of fictional and nonfictional works, which prompted his initial interest in writing. Song views writing as more than a duty or schoolwork; it is a portal to creative delight. Through Inlandia: A Literary Journey, Song hopes that his writing reaches the hearts of many other readers.